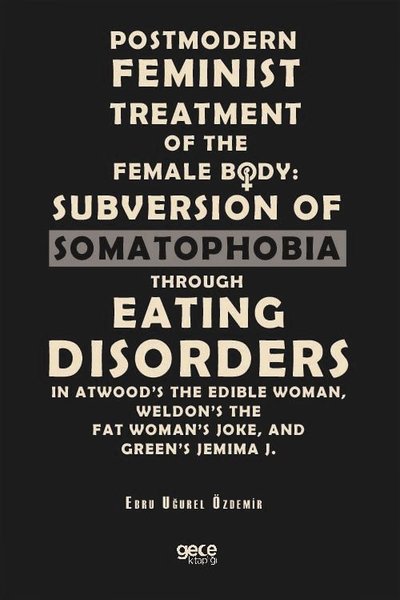 This book critically examines the subversive aspect of anorexia nervosa and binge eating within the context of postmodern feminist understanding of the female body in Margaret Atwood’s The Edible Woman (1969), Fay Weldon’s The Fat Woman’s Joke (1967), and Jane Green’s Jemima J. (1999), respectively. The purpose of this study is to reveal the power of eating disorders both as the cause and the cure of somatophobia, which unfolds in the women of the selected novels, through examining the development of the self within the body with references to postmodern philosophy and postmodern feminist approach besides cultural and psychological associations of somatophobia. To realize this aim, through an interdisciplinary research and the analyses of the novels, parallelisms and relationships between the cultural ideology and the female embodiment and subjectivity; the images characterizing the ideal femininity; the philosophical background of somatophobia; modern and postmodern understanding of eating disorders; and the deconstruction/reconstruction of the body image are interpreted within the framework of postmodern feminist epistemology.