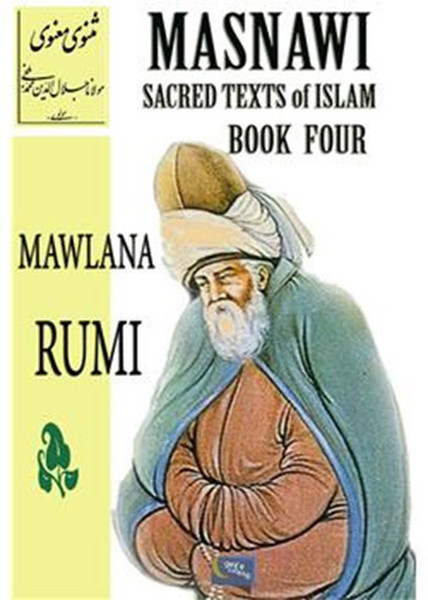 
Book three of the Masnavi must be read in order to understand the other first two volumes. It also includes popular stories from the local bazaar to fables, tales from Rumi's time.

Story I: The Travelers who Young Elephant
Story II: The Villager who invited Townsman to visit him
Story III: The Jackal who pretended to be a Peacock
Story IV: Moses and Pharaoh
Story V: The Elephant in a Dark Room
Story VI:The Lover who read Sonnets to his Mistress
Story VII:The Man who prayed earnestly to be fed without work
Story VIII:The Boys and their Teacher
Story IX:The Darvesh who Broke his Vow
Story X:The Old Man who made no Lamentation at the Death of his Sons
Story XI:Bahlol and Darvesh Story
XII:The Visions seen by the Saint Daquqi Story XIII:The People of Saba
Story XIV:Miracles performed by the Prophet Muhammad
Story XV:The Man who asked Moses to teach him language of animals
Story XVI:The Woman who lost all her infants
Story XVII:The Vakil of the Prince of Bokhara Story XVIII:Deadly Mosque

The "Masnawi" is Rumi`s greatest poetic work, composed during the last years of his life. He began it when he was between the ages of 54-57 [about 1258-1261] and continued composing its verses until he died in 1273 (with the last story remaining incomplete). It is a compendium of sufi stories, ethical teachings, and mystical teachings. It is deeply permeated with Qur`anic meanings and references. Rumi himself called the Masnavi "the roots of the roots of the roots of the (Islamic) Religion... and the explainer of the Qur`an (Masnavi, Book I, Preface).
(Tanıtım Bülteninden)