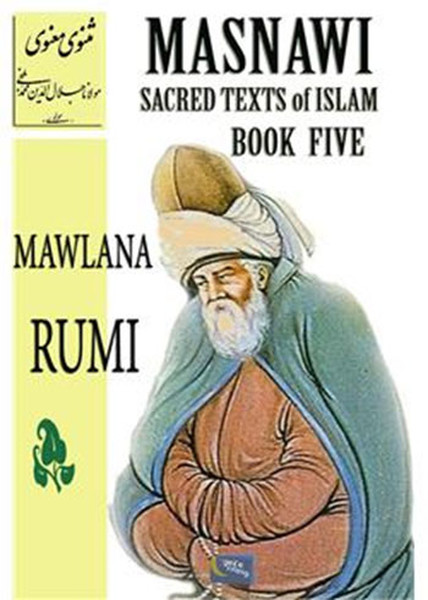 
The Book Five of the Masnavi must be read in order to understand the other first Four volumes. It also includes popular stories from the local bazaar to fables, tales from Rumi's time:

Story I: The Prophet and his Infidel Guest
Story II: The Arab and his Dog
Story III: The Sage and the Peacock
Story IV: Muhammad Khwarazm Shah and the Rafizis of Sabzawar
Story V: The Man who claimed to be a Prophet
Story VI: The Disciple who blindly imitated his Shaikh
Story VII: How Adam was created out of a handful of earth brought by an Angel
Story VIII: Mahmud and Ayaz Story IX: The sincere repentance of Nasuh Story X: Lion, the Fox, and the Ass Story XI: The Mosalman who tried to convert a Magian Story XII: The Devotee who broke the noble`s wine-jar..

The Masnavi is divided into six books, and Rumi wrote prefaces for each book. The earliestcomplete manuscript (the "Konya manuscript") was completed in December, 1278 (five years after Rumi`s death).